Snow appeared in my area, and I’m not a happy camper about it. I cheer myself up with some odd Japanese snacks! Whoot!

Remember way back when I said I was doing a comedy show? Here it is! The funny ladies are back for another round of fun and merry times. And our auction goes to domestic abuse shelters across Japan! Next time, you should come be a part of this merriment.

When is the next one? Good question! I’ll let you know soon. 😀

Yep, I’m late to the party for that little salutations, but that’s how life goes don’t it? I took a much longer break than I intended, ended up having a really good time with friends old and new. I went to Christmas and New Year’s parties, I did comedy shows, I did a lot of various things.

Now as the new year begins, I find myself tied up in knots. It’s hiring season here in Japan, and I’m trying to get hired. I’m worried with only a couple months left that I might not find something, because I’m that person, the one everyone else expects will land on their feet just fine. Meanwhile, I’m nearly always certain I’m about to be a big failure.

And so, I work hard and I apply myself. I’ve posted resumes, I’m even working on a Japanese one at the moment, but it’s tough. There are always people out there with more experience, more education, or more connections than me. Not to mention, of course, many of those same people probably passed the JLPT long before I ever tried. It’s all I’m thinking about as I type, type, type away from this job site to the other.

However, I do still hope 2018 will bring good things. No matter what, I want to stay in Japan, in a country that I love and I consider home. I don’t have any plans to leave anytime soon. I do want to move, so hopefully I can procure a profession of some variety and then get somewhere closer to where the majority of my friends live.

So that’s my two resolutions I suppose: Get a job and move!

I’ll be letting you all know if and when I get around to accomplishing either of those. While you’re waiting, I’ve got a video for you to see! It’s catching everyone up on what I’ve been doing in more detail. I basically just talked the cheat sheet version, but if you’re interested, take a look and enjoy!

First up this Saturday is the “Out of the Closet Comedy Show!” I’ll be performing the “Snatch Game” with two other members. We’ll also be auctioning off items for Rainbow Railroad, an LGBTQIA+ organization that helps queer refugees.

But that’s not all! I’ll also be performing with the Tokyo Women’s Comedy Club in “That’s What She Said IV: Christmas Cheer.” For this event, we will be auctioning items as well to go towards awareness and prevention of domestic violence.

Please head on over to either event and watch me try to be funny. It’ll be a blast! 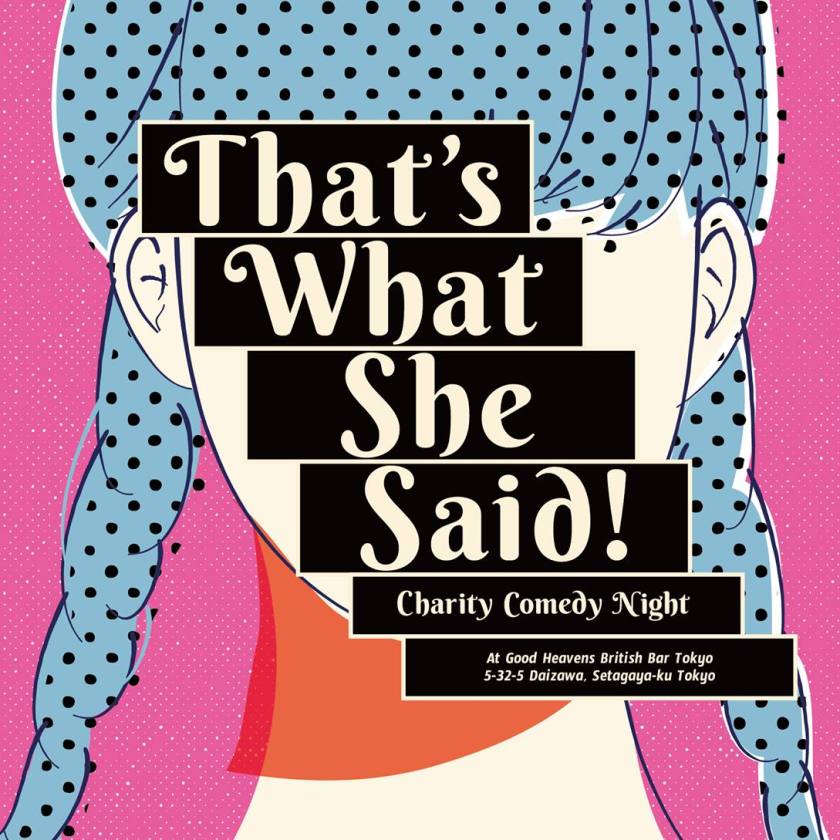 Last Friday, I got the great opportunity to perform my debut with the Tokyo Women’s Comedy group in “That’s What She Said!” a charity comedy night. I hope you enjoy this as much as I did!

I’m playing a little bit of a catch up game here. I have a whole bunch of videos I wasn’t able to edit until recently. In this vlog, I go to a hanami party, I support my friend getting her lip pierced, and then I go to a Steampunk party!

A hanami party, for those of you who don’t know, are parties where you get together with friends (sometimes co-workers). You drink and eat under the sakura blossoms, take lots of pictures, and in general just have a fun time. I went to Midtown Park in Roppongi for this one, but I actually ended up going to about three.

My friend K really wanted to get her lip pierced, so we went to a piercing shop called “Extreme Body Piercing” in Harajuku. We decided to also show other people where it is so they can find it if they too desire to get a cool new fierce look.

And finally, the Steamgarden is an annual Tokyo event that’s for two days. Every year, people come to sell their wares, but apparently it’s also a really cool dance party! I wasn’t expecting that, so it was an awesome surprise. I’ll def be going next year!

Between the old school year and the new, I set off to Okunoshima. Also known as Bunny Island, it’s a place that features adorable little fluffy rabbits for visitors to enjoy, as well as a Poison Factory Museum from World War II. I highly recommend going there if you get the chance!

As you are probably all well aware, I’m very much interested in LGBTQ rights, and as such I’m a part of the drag community in Tokyo. I’ve just recently been promoted from “that girl hanging out and doing stuff backstage all the time” to official position of Production Manager. Moral of the story kids, do enough free work for your friends and you’ll get a job (volunteer work of course).

Kara, the creator of the YouTube channel “Wherever With You,” decided to come to Tokyo Closet Ball to interview people about their performances. I ended up getting interviewed as well!